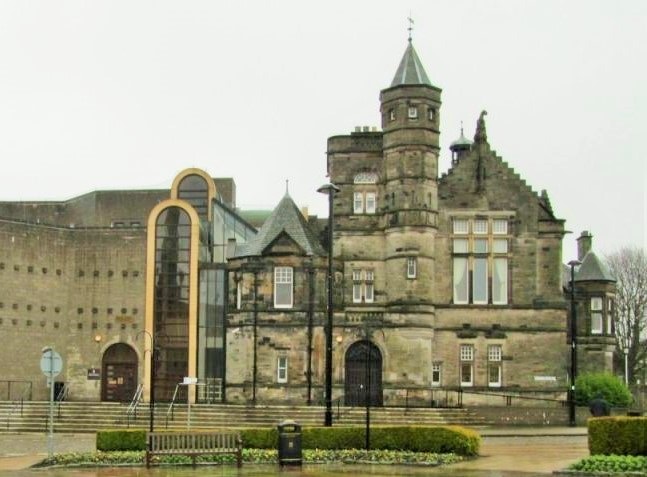 Two custody officers at Kirkcaldy Sheriff Court were badly injured after being violently attacked by a prisoner.

A female worker was grabbed by the ear and repeatedly punched while a male colleague required blood tests after being bitten in the chest.

The attacks on the two GEOAmey workers were carried out by 21-year-old Andrew Smith who has now been jailed for the offences.

Smith, whose record of previous convictions was described as “atrocious”, became angry after his mum shouted “I love you” to him outside the court building.

He shouted back at his mum, “I hate you” before becoming aggressive with the security staff.

Smith, a prisoner at Perth, admitted that on 20th August at South Fergus Place, Kirkcaldy, he assaulted Joshua Richardson, then in the course of his employment, by biting him on the body to his injury.

He also admitted he assaulted Georgia Garrigan, by seizing her ear and repeatedly punching her on the head to her injury.

Depute fiscal Claire Bremner said that at 1.35pm Smith was being moved from the court building to a van to take him to prison after he was remanded in custody.

As he was being led to the vehicle, he saw his mother who shouted, “I love you” to him.

He shouted back, “I don’t love you. I hate you. Thanks for getting me remanded.”

He became aggressive and refused to move. Four officers were then involved in trying to get Smith into the vehicle. He was put down to the ground at one point and all the time he was handcuffed to Mr Richardson.

Once he was put in the van Smith jumped up and seized the ear of the female officer “in a tight hold”. She then felt three blows to her head and three to her ear.

He shouted he was going to ‘have them’ and also made the threat, ‘I’m going to bite yous.’

Smith then moved towards Mr Richardson with his head down and bit him in the chest, causing a bleeding wound.

Ms Garrigan handcuffed herself to Smith in place of Mr Richardson who had to leave the scene because of his injury.

Afterwards Garrigan was “pale, faint and visibly shaking”. She went to her GP with a sore neck and later went to hospital with pins and needles in her arms.

Mr Richardson went to hospital and was given a Hepatitis B booster vaccination and was advised to return for more blood tests.

Defence solicitor Kerr Sneddon conceded, “It’s not good to put it mildly. He’s still only 21 but his record is unenviable.”

Despite this, the solicitor claimed his client was “quite a nice character when sober and clean from drugs”.

He added, “His mother had concerns about him and he was arrested. He realises now that the custody officers were just doing their job that day.”

Sheriff Alastair Brown told Smith his record was “atrocious and includes violence”. He jailed him for two years and four months.