Window smashed as bus is pelted with stones 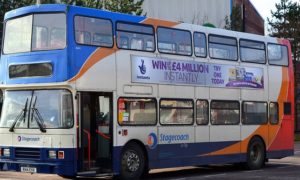 A service bus has been pelted with stones causing a window to smash and shatter over passengers.

Those on board included a number of children, including a baby in a pram.

The incident happened last night at around 6pm at the Promenade, Leven, near to Levenmouth Swimming Pool.

The number 49 Stagecoach bus was targeted by a group of youths, aged around 13-15, who were seen running off afterwards.

One was wearing a red hooded top and another is believed to have been wearing a green hooded top.

Police Sergeant Craig Fyall, of Levenmouth Police Station said, “Fortunately this incident never resulted in serious injury, however those responsible have shown blatant disregard for the safety of a number of people and children, including a young child who was within a pram.

“I would urge anyone who was in the area around 6pm on Tuesday, April 11, and may have seen the incident or the group described, to get in touch with us as soon as possible.”