Violent attack by customer on female worker at Stephens 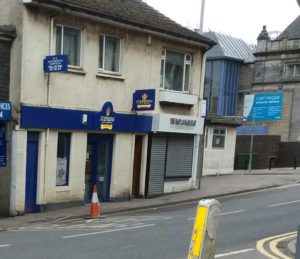 A female shop-worker at a Stephens the Bakers shop in Dunfermline was assaulted by customer with a background of mental health problems.

The woman was repeatedly punched by Steven Feldman as she closed up the store in Pilmuir Street.

Feldman (47), of Victoria Terrace, Dunfermline, went on trial at the town’s sheriff court.

He was found guilty of a charge that on 20th September at Pilmuir Street, he assaulted the woman by repeatedly punching her on the head.

Feldman had been in the shop to buy bridies earlier in the day without incident.

However, as the woman closed up the shop she saw Feldman had returned and was outside looking through the window.

Feldman made a bizarre comment that she had “stabbed him” with a bridie earlier and he began punching her.

Sheriff Craig McSherry told Feldman, “I have little hesitation in finding you guilty of this charge.”

Defence solicitor Alexander Flett said his client had a very significant psychiatric history and had been diagnosed with schizophrenia.

“He generally keeps himself to himself. He had been in the shop on many previous occasions and there hadn’t been any trouble before,” added Mr Flett.

Sheriff McSherry told Feldman, “Given the circumstances there are certain obvious questions that need to be answered about your mental health condition.

“I take an assault on a shop employee extremely seriously and I’m considering a custodial sentence.”

The sheriff called for reports and Feldman will be sentenced on 17th April.