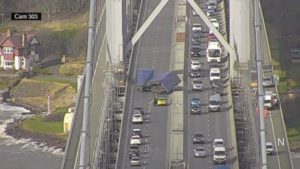 There was traffic chaos for commuters again this afternoon with the Forth Road Bridge closed to all traffic after a lorry overturned in high winds.

By 6.30pm the bridge was back operating as normal after the earlier disruption.

The accident happened at about 2.50pm while the bridge was closed to high-sided vehicles.

The lorry was blocking the northbound carriageway but traffic has been halted in both directions over fears the trailer could be moved by the wind.

No-one has been injured in the accident but vehicles are stuck both on the bridge and on the surrounding roads.

Police are advising drivers to avoid the bridge and find alternative routes.

Bridge operators are urging any motorists stuck on the bridge to remain in their vehicles.

They said, “Our team is on site assessing the situation – we’ll get the lorry removed as soon as it is safe to do so.”

It is understood the lorry crashed near the North Tower, close to where another truck crashed in January.

On that occasion the bridge was closed for more than 19 hours after a lorry was blown from the northbound onto the southbound carriageway.