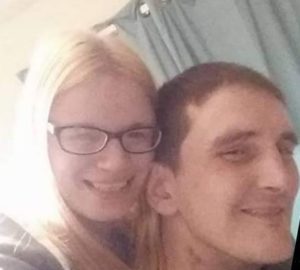 A convicted killer, who threatened to stab a neighbour with a knife, has been jailed for three-and-a-half years.

David Kinloch (35) armed himself with the weapon and chased the neighbour shouting, “I’ll stab you.”

A terrified Kieran Lock (21) had only gone to Kinloch’s door because of screaming coming from the house late at night.

The screams were coming from Kinloch’s girlfriend Amanda Britt, who was also jailed for her conduct during his trial at Dunfermline Sheriff Court.

Mr Lock ran into his home beside his young family as Kinloch stood outside with a knife in his hand.

When police arrived, Kinloch challenged them to fight and threatened to set his dog on them.

In 2008, Kinloch was jailed for the culpable homicide of his girlfriend in Methil.

Sonya Todd died after a horrific, prolonged attack by Kinloch in which he repeatedly hit her with a dog chain.

In 2017, residents in Dunfermline were concerned the killer being housed in their street and began a campaign to get him moved.

When Britt (32) was heard screaming and shouting for help late at night, the worried neighbour went to their door to find out what was happening.

Kinloch armed himself with a knife and threatened to kill Mr Lock, chasing him across the road.

The chaos was captured in 999 call recordings which were played during the three-day jury trial which saw Kinloch convicted of three charges.

The proceedings were halted at different times by outbursts by Kinloch and Britt, who attempted to have the trial ended by revealing her boyfriend’s culpable homicide conviction.

She was subsequently jailed for four months for contempt of court.

Kinloch was due to be released from his current jail term for different offences on 22nd March.

The jury found that on 30th December 2017 at Craigmyle Street, Dunfermline, Kinloch behaved in a threatening or abusive manner by repeatedly shouting, swearing, repeatedly utter threats of violence towards Kieran Lock whilst in possession of a knife and pursued him.

Defence solicitor Ian Houston called on Sheriff Charles MacNair to defer sentence on his client so that he could be released at the end of his current sentence.

Mr Houston said, “He knows if he can’t control his anger and his temper he will simply find himself in trouble again and again.”

The solicitor claimed Kinloch had suffered “victimisation” from the community during his time in Dunfermline.

He said, “This incident must have been extremely frightening for Mr Lock. He was chased when you were making threats and he knew that you were capable of committing lethal violence.”

In September 2008, Kinloch, then known as Craigie, admitted the culpable homicide of his girlfriend, 21-year-old Sonya Todd at their home in Methil.

He kicked, bit and struck the mum-of-one with a dog chain during an attack lasted up to five hours.

Kinloch was initially charged with murder but admitted culpable homicide in light of evidence that Tonya’s diabetes was a factor in her death.

He was jailed for six years with three years’ supervision.