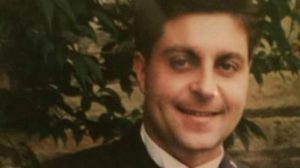 A van driver has admitted causing the death of a Fife man in a crash on the M8 near Livingston by careless driving.

Alexander Cassidy smashed into Wayne Strickland’s car last July, causing it to burst into flames. The father-of-two from Inverkeithing died in his vehicle.

Cassidy (29) from Kilmarnock, originally faced a charge of causing death by dangerous driving.

However, he admitted failing to observe slow-moving and stationary traffic which had tailed back onto the inside lane at J3 of the M8 because of roadworks on the A899.

Judge Lord Clark banned him from driving and called for reports ahead of sentencing on 19th April.

The High Court at Livingston heard that Cassidy’s Mercedes Sprinter van slammed into the back of Mr Strickland’s Peugeot, shunting it into the vehicle in front.

Mr Strickland was severely injured and trapped in his car which almost immediately exploded into flames.

Advocate depute Jane Farquhar, prosecuting, said the fire “consumed his car and its contents” before spreading to a Kia Rio in front and the Mercedes van driven by the accused.

She said, “The accused tried immediately to get in Mr Strickland’s car, which was engulfed in flames.

“He had to be dragged away because it was too hot and there were fears it might explode.”

She said a doctor who was in a car further up the slip road saw the fire and ran back to offer any medical assistance she could.

The doctor saw Cassidy pacing about the scene with his head in his hands.

She heard him say, “I tried the door. I tried to get him out, but the door was jammed.

Mr Strickland had multiple injuries, including a fracture of the front of the skull, broken ribs and fractures of the spine.

However, Ms Farquhar said there was no convincing evidence of combustion inhalation, which indicated that perhaps death might have occurred on impact and not as a result of the fire.

Barry Smith, defence advocate, told the court, “Mr Cassidy is most anxious I should formally express and record on this day his most sincere regret and remorse at the tragic consequences of this accident.

“Also to express on his behalf his most sincere condolences to the family of Mr Strickland, some of whom are in court today.”