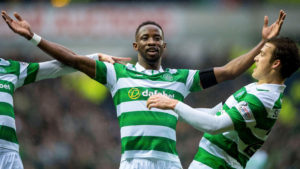 A Rangers fan has been fined £700 after sending a racist tweet about Celtic striker Moussa Dembele.

After being caught and charged, Connor said he felt “humiliated” over his actions and has given up his season ticket for Ibrox.

Connor (25), of The Beeches, Lochgelly, appeared in the dock at Dunfermline Sheriff Court.

He admitted that on 12th March at his home and at the Elizabethan pub, Halbeath Road, Dunfermline, he sent messages to Moussa Dembele, Chris Sutton and others that were grossly offensive by repeatedly posting comments of both racial hatred and religious hatred on Twitter.

Connor sent all the messages on the day of a Celtic-Rangers match on 12th March.

He started with a rant about TV commentator Sutton at 2.35am and followed this with an offensive post about the Pope at 3.06am.

Then at 10.36am he switched from religious bigotry to racism with a post about Dembele.

Depute fiscal Dev Kapadia said, “Police officers were made aware of racist tweets made about Moussa Dembele, a player for Celtic.”

Inquiries led to Connor and also revealed the other offensive tweets.

After being detained by police, Connor claimed, “I can’t remember exactly what was said.”

However, he said he thought one of them was about a Celtic player and he admitted sending all the tweets.

Defence solicitor Peter Mullin said, “He’s not stupid and understands how inappropriate this was.

“He is humiliated and was worried when he came to my office. He wants to put this chapter of his life behind him.

“He has given up his season ticket for Rangers on the back of this. He’s making efforts to take a step back from all this. He would like to apologise to the court.”