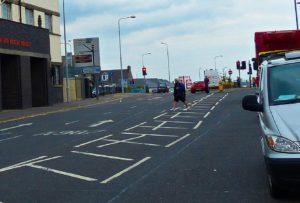 Two asylum seekers went on a drunken joy-ride through Fife, a court has heard.

The car driven by Jiyar Ali Hashmi was involved in a collision in Dunfermline town centre.

He was over the limit and his friend Hawkar Abbas Sharif took over as driver without stopping to report the crash.

However, Sharif was even more drunk than his companion and both were stopped by the police shortly afterwards.

The pair, from Iran and Iraq but currently living in Glasgow, were in the dock at Dunfermline Sheriff Court today, accompanied by a translator.

Jiyar Ali Hashmi (22) admitted that on 16th June in Main Street, Crossford, and other streets in Fife, he drove a car having consumed excess alcohol.

His reading was 38 microgrammes of alcohol in 100 millilitres of breath, the legal limit being 22 microgrammes.

He also admitted that in Carnegie Drive, being the driver of a car that had been involved in a collision with another vehicle, he failed to stop.

Hawkar Abbas Sharif (29) admitted that on 16th June in Carnegie Drive, Dunfermline, he drove having consumed excess alcohol. His reading was 42 microgrammes of alcohol in 100 millilitres of breath.

Depute fiscal Rebecca Clark said the car driven by Hashmi had collided with another vehicle in Carnegie Drive, outside the Pizza Boy takeaway shop, at 3.30am.

The police were contacted but Hashmi failed to stop. Sharif then took over the driving until the car was stopped by police at around 4am.

The court was told that Hashmi had come to his country from Iran because of “persecution by the authorities”. He is currently an asylum seeker.

The court heard that Sharif was originally from Iraq, came to the UK in 2014 and his asylum application was rejected. He is currently planning to appeal that decision.

Sheriff James MacDonald imposed two community paybacks on Hashmi with a total of 125 hours of unpaid work and banned him from driving for 18 months.

He also imposed a community payback order on Sharif with 75 hours of unpaid work and disqualified him from driving for 12 months.

Both had also been charged with driving without a licence or insurance but ‘not guilty’ pleas to these allegations were accepted by the Crown.