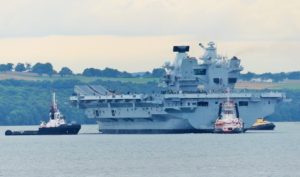 The Russians are already viewing the massive Rosyth-built warship as a sitting duck.

Large crowds thronged the Forth on Monday as the UK’s biggest-ever warship left the dockyard for the first time.

He warned the new ship, nicknamed ‘Big Lizzy’, to keep a safe distance from the Russian carrier Admiral Kuztensov.

He added, “The ecstatic statements of UK Defence Secretary Michael Fallon about the exterior supremacy of the new aircraft carrier over Russia’s Admiral Kuztensov warship demonstrate his absolute ignorance of the naval science.”

He warned, “It is in the interests of the British Royal Navy not to show off the ‘beauty’ of its aircraft carrier on the high seas any closer than a few hundred miles from its Russian ‘distant relative’.”

UK Defence Secretary Michael Fallon called the Admiral Kuznetsov “old, dilapidated” and added “I think the Russians will look at this ship with a little bit of envy.

“We will take every precaution to make sure that they don’t get too close but I think they will be admiring her,” he added.