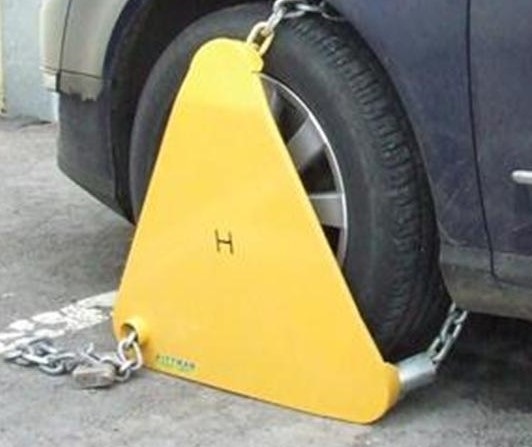 A disabled Fife man assaulted a DVLA officer who was clamping his car, a court has heard.

William Pearson told the clamper he was exempt from road tax because of disability before pushing him away from his vehicle.

He then moved the clamp and drove off. Even though he was indeed exempt from road tax, the driver has now been hit by a £250 penalty at Dunfermline Sheriff Court.

Pearson (34), of Pentland Terrace, High Valleyfield, appeared in the dock and submitted a guilty plea.

He admitted that on 3rd July last year at Pentland Terrace he assaulted the DVLA enforcement officer in the course of his duty, by pushing him on the body.

Depute fiscal Kavin Ryan-Hume said that at 11.40am the complainer was on patrol carrying out his duties.

He came across a vehicle which had no road tax and began to attach a wheel clamp. As he was kneeling down to do so, Pearson shouted, “Dinnae clamp my car, I’m exempt.”

The DVLA worker was then pushed on the shoulder and Pearson took the clamp away from his vehicle before driving off.

Police were contacted and later found Pearson within in his vehicle. He told them, “I didn’t assault him. I just pushed him.”

Defence solicitor Larissa Milligan said her client was exempt from road tax because of disability.

He felt the officer would not engage with him and appreciated he shouldn’t have pushed him but was “frustrated”, she added.

Sheriff Derek Reekie told Pearson, “To react in that way was totally unacceptable and you have a significant record for road traffic offences. A push is an assault, particularly on someone who is only doing their job.” He imposed a fine of £250.