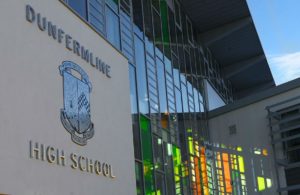 Police are investigating an incident in which a Fife schoolboy’s jacket was set on fire.

The incident is reported to have happened at Dunfermline High School on Friday lunchtime, when a 14-year-old boy was allegedly targeted by a youngster of a similar age.

A piece of paper was apparently set alight in the hood of the victim’s jacket and the fire took hold before being put out.

The boy was not injured but was left extremely frightened and shaken up by what happened.

A Police Scotland spokesperson said: “Police in Fife are aware of an incident at Dunfermline High School when a pupil caused fire damage to another pupil’s clothing.

“Officers are following a positive line of inquiry and liaising with relevant partners as part of this investigation.”