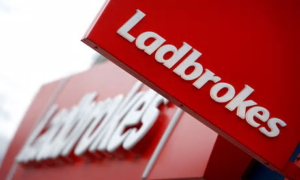 A Dunfermline man, who went into a local bookie shop claiming he had a gun and demanded money, has been jailed.

A sheriff rejected claims that it was a “joke” that went wrong.

Sinclair previously admitted that on 16th April at Ladbrokes, Baldridgeburn, he conducted himself in a disorderly manner, stated to an employee there, that he was in possession of a shotgun, demanded money from him and committed a breach of the peace.

The court was shown CCTV of the incident with Sinclair leaning on the counter as he made the threat.

Depute fiscal Azrah Yousaf said the incident occurred at 6.20pm. The staff member was having a short break at the door and saw the accused coming from the direction of the town centre and entering the shop.

The worker went inside and saw that Sinclair had two black eyes and a cut nose.

Sinclair told the worker, “Give me your money. I have a shotgun with me.”

The Ladbrokes worker raised the alarm by pushing a panic button then received a call from his company’s security office.

“He told them there was a male demanding money and was told the police were being called,” the depute continued.

Sinclair was locked in the premises by the worker but when another customer came in, he made his escape.

When police arrived in the area they saw Sinclair running down an alley into a garden and he was detained.

He later laughed as he told officers, “Attempted robbery? It should be armed robbery. I had a shotgun.”

He then admitted he had just made up the claim that he had a gun.

Defence agent Chris Sneddon said it was “an ill-advised joke” and his client had been drinking before his “bizarre” actions.

However, Sheriff Craig McSherry told Sinclair, “It wasn’t a joke. Although the employee continued to stand there, I don’t know what else he could have done. He didn’t think it was a joke as he called the police and reported it.

“Even when you were detained still make the allegation you have a shotgun with you.”

He jailed Sinclair for 16 months.