Dunfermline’s best musical talent will be at the centre of the new Outwith arts festival in the town next month.

The four-day festival has a wide-ranging programme of music, comedy, theatre and literature between Thursday 7th and Sunday 10th September.

The packed music programme will see over 35 bands playing at venues in the town centre, including on a stage in the High Street.

Those taking part in the event include local emerging talents such as Foreignfox, Moonlight Zoo (pictured above) and Dancing on Tables.

The town will be rocking with acts playing throughout the afternoon and evening of Saturday 9th September at five venues.

A stage will go up in the gap site in the High Street, behind the bus station, with bands playing there from 12.30pm to 5.45pm.

The line-up here includes, Lucy and the Lyrics, Miracle Glass Company, Deni Smith, Broken Boy and Dancing on Tables, who start their set at 5.15pm.

At Lourenzo’s, the music will run from 4pm to 10pm and bands appearing here include The Vegan Leather, Oskar Braves and Moonlight Zoo, who played the Party at the Palace festival at the weekend.

The band cut their teeth busking around the streets of Europe, followed by headline shows throughout Scotland in their first year. They then made their live television debut on The Riverside Show on STV and were booked to headline at King Tuts in Glasgow.

The Canmore will stage acts from 3.15pm to 9.30pm, including Faramach, The Johnstown Flood, Cognac Twins and The Complainers. 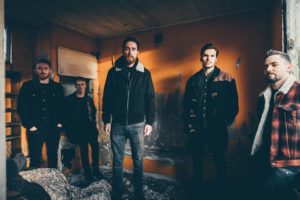 Foreignfox (above), who have already played at festivals such as T in the Park, Belladrum and Electric Fields, will be back in their home town as part of the line-up at Harlem.

As well as the main Saturday event there will also be a gig by Glen Gates and The Passing Sages at The British Legion Club in the New Row on the Thursday night. They are a new local band playing a mixture of soul, country and funk.

“Live music will be a major part of the festival featuring our own best bands and those from across Scotland.”

The group organising the music programme is made up of Graeme Scott, Billy George, Jonny Watt (Foreignfox), Grant Allan (Oskar Braves) and George Murray (Lucy and the Lyrics and Johnstown Flood).

For full details on the festival see the website: outwithfestival.co.uk