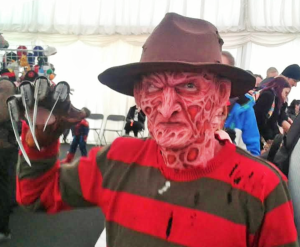 Around 4500 people attended Dunfermline Comic Con on Saturday, turning Pittencrieff Park into a celebration of the weird and wonderful world of comic books and superheroes.

It proved to be a fun day out for families and fantasy fans of all ages, many dressing up as their favourite characters.

Last year was the event’s inauguration and was a sell-out leading the organisers to double capacity this time with the addition of a large marquee alongside the Glen Pavilion.

One of the highlights of the day was a colourful cosplay parade through the park before the entrants were judged. 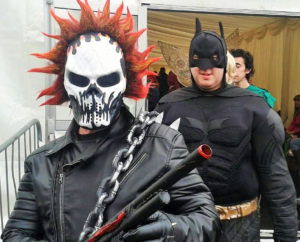 The event is organised by The Little Shop of Heroes and supported by Dunfermline Delivers.

There were 100 stalls this year compared to forty last time and guests included around 30 comic book artists and writers, some coming from as far off as the USA.

There were also question and answer panel sessions with the guests. 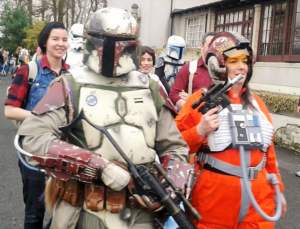 Alby Grainger, of the Little Shop of Heroes, said, “The feedback we’ve been getting is tremendous. We wanted to build on last year’s event and that’s meant a lot of work but we’re delighted with how the day has gone.”

Returning from last year’s event due to demand from Doctor Who fans was a replica Tardis and David Tennant lookalike.

There was also the first public showing in Scotland of the X-34 Land Speeder replica from Star Wars.

Chris Foote, events manager of Dunfermline Delivers, said, “It’s again turned out to be a big success and we’re delighted to see so many people visiting from across the country.”