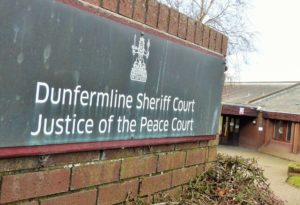 A Fife drug dealer claimed he “found” a large quantity of diamorphine worth over £25,000.

Mark Kirkland said the drugs came into his possession after they had been hidden by a neighbour.

Kirkland (44), of Watters Crescent, Lochgelly, appeared in the dock at Dunfermline Sheriff Court as a result of his windfall.

He admitted that between 7th February and 14th May last year, at his home, he was concerned in the supply of a controlled drug, diamorphine.

He also admitted that on 14th May last year, he was unlawfully in possession of a stun gun.

Depute fiscal Claire Bremner said police executed as search warrant at Kirkland’s home and found 328.7 grams of diamorphine which had a potential value of £25,280.

There were also two mobile phones recovered as well as £880 in cash.

The officers also found a stun gun in a on top of a cupboard.

Defence solicitor Alexander Flett said, “He found the drugs. An upstairs neighbour had concealed them.”

The solicitor added that stun gun was not in working order.