Bogus cop claimed there was a bomb in Fife shopping centre 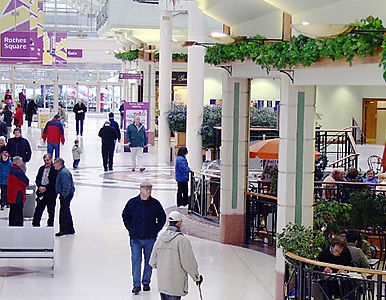 A Fife man made a hoax call about a bomb being in a suitcase at a shopping centre because he was “bored” and thought it would be “a laugh”.

Cop impersonator Dylan Sinclair also made phone calls to random elderly women. He told a 75-year-old woman at 1.15am that people were trying to get into her home.

Another woman, who was 83 at the time, was also called in the early hours of the morning by the time-waster.

The most alarming message made by ‘Sergeant Anderson’ was to security staff at the Kingdom Centre, Glenrothes, saying it was thought there was a bomb there.

Sinclair (21), of Gallagher Avenue, Leven, appeared in the dock at Dunfermline Sheriff Court.

He admitted that on 2nd March he impersonated a police officer in a phone call to a 75-year-old woman, claiming he was a PC Anderson and stated that persons were trying to open her door.

On the same day, he also impersonated a police officer in a phone call to a 83-year-old woman claiming he was a Sergeant Anderson and advised her not to go outside because of a red weather warning.

On 7th March, made a phone call to Kingdom Centre, Glenrothes, with the intention of making people to believe there was a bomb in the centre.

Depute fiscal Azrah Yousaf said Sinclair called security staff claiming he was a police sergeant and that a suspect with a long coat was being followed in the centre.

“The caller said this man was carrying a red suitcase and they thought it was a bomb,” added the depute.

Security staff looked at CCTV and carried out checks of bins and exits. All available officers in the area were called to the scene with a view to evacuation.

However, after more checks were carried out it was realised there had a previous hoax call from a ‘Sergeant Anderson’.

The calls were traced to Sinclair’s phone as he had made a call to the police about an unrelated matter in 2017.

Sinclair told police it had been because he had nothing to do. “He said he was bored and made prank calls for a laugh,” added Ms Yousaf.

Defence solicitor Martin McGuire said his client’s position is that phone numbers were selected at random and it was only through coincidence that both women were elderly.

The court was told Sinclair is already on a community payback order.

He called for reports and allowed bail to continue but warned Sinclair, “That’s no indication of the decision at the end of the day.” Sentencing will take place on 12th September.