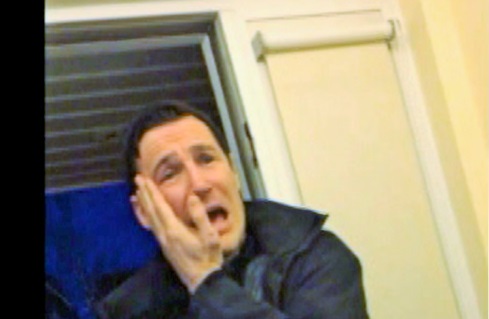 A disgraced police sergeant, who tried to frame his wife for assault by headbutting a door and claiming she punched him, has been ordered to do unpaid community work.

Murphy was in police uniform when he butted his front door and began punching himself.

The control freak hoped to land his estranged wife in trouble but his plan backfired when a teenager filmed his “bizarre” ham acting antics on her mobile phone. 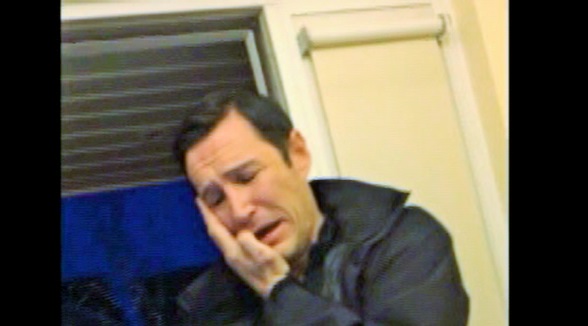 He gave himself a black eye then tried to blame his wife, whining, “I can’t believe you just punched me” and “I’m so scared”.

His wife had called the police and Murphy was apparently trying to put his assault claim on to the recorded call.

Murphy is now being booted out of the police and is looking for a new job as a cabbie or delivery driver.

Murphy, a policeman for 14 years based in Edinburgh, appeared for sentencing at Dunfermline Sheriff Court today.

He was placed on a community payback order with 275 hours of unpaid work and was also made subject to a five-year non-harassment order to protect his wife.

Defence solicitor Gordon Williams had told the court his client was “very contrite”. 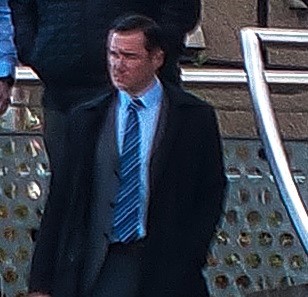 He said, “He knows he’s fallen short of what was required. He’s now living with his parents. His career in the police is ending as a result of this and he’s started looking for other work.”

The solicitor said Murphy had enjoyed a “distinguished career” in the police and had “particular knowledge of dealing of cases where there has been family disruption”.

Sheriff Charles MacNair told Murphy, “In my view, the nature of these offences shows a degree of control by you over your wife.

“Your behaviour on the filmed incident was particularly concerning.

“You are a first-time offender but these are very serious offences. In addition to the court sentence, you will lose your employment, income and pension rights.

“However, that is something you brought on yourself.” 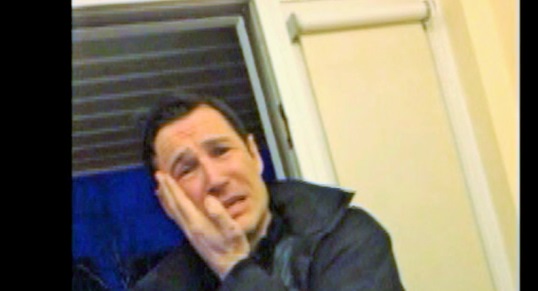 After a trial which ended last month, Murphy was found guilty of three offences, including assaulting his wife.

A charge of wasting police time was dropped because even though Murphy did phone the police to report the alleged assault, officers were already on their way answering an initial 999 call from his wife.

Instead of going to start his shift at Corstorphine, Edinburgh, Murphy was arrested and taken to Kirkcaldy police station.

In a previous incident, when Murphy had moved out of the family home, he returned unexpectedly late at night, entered by the back door and found another man there with his wife.

The man, another police officer, Ian Arthur, now in a relationship with Mrs Murphy, ran from the house and was chased down the road for half a mile by Murphy who was repeatedly shouting “I’ll f****** kill you”.

Murphy (40,) now of New Swanson Estate, Edinburgh, was convicted of three charges arising from separate incidents at his then home in Dunfermline. On an occasion between 1st January and 31st December 2015 at Bennachie Way, he assaulted his wife Sheryl Murphy (now Higgins), by seizing her head, pushing her on to a bed and struggling violently with her.

On 24th February at Bennachie Way, he behaved in a threatening or abusive manner by shouting at Sheryl Murphy and at Ian Arthur, behaved aggressively, made threats of violence to them, stood in front of a car being driven by Mrs Murphy, refused to desist for a lengthy period and prevented her from leaving.

On 10th April at Bennachie Way, he behaved in a threatening or abusive manner by shouting at Sheryl Murphy and acting aggressively, all in the presence of a 16-year-old, placing them in a state of fear, alarm and distress.

A charge of wasting police time was dropped because his wife had made the first phone call to the police and officers were on their way to the house when Murphy made his own call.

The 16-year-old who recorded part of the front door incident on her phone, told the court, “He headbutted the door and then punched himself twice on the face. He punched himself really hard on the right eye. I put on my camera and started recording it.”

His former wife Sheryl Higgins (35) told the court Murphy was “mean and nasty” to her during their marriage.

The couple had two children together and she also had two older kids who lived at the house.

She told the court, “He headbutted the door twice and then punched himself twice in the face. I was in shock that somebody would do that.

Mrs Murphy phoned 999 to report that her husband was self-harming and he was arrested when officers arrived at the house.

Ian Arthur said he had gone back to Mrs Murphy’s home late at night after meeting her after work and they sat in the living room talking for around 10 minutes in the dark.

Murphy had entered by the back door and Mr Arthur quickly left by the front door.

The off-duty officer. still in uniform, was then chased for half a mile down the road. “Five or six times he shouted ‘I’m going to f****** kill you’,” said Mr Arthur, who eventually managed to escape uninjured.

The mobile phone footage was shown in court several times during the four-day trial.

Murphy said he felt “uncomfortable” when he viewed it.

It shows him pretending to be crying and whining after being assaulted by his wife. However, his facial expression remains calm and he is apparently sending a message on his phone as he continues to moan.

“It’s a bit pathetic isn’t it, you wailing like that. Why were you scared of a 16-year-old, you an experienced police officer?

“It’s all an act on your part. You weren’t hit, you punched yourself for effect.

She added, “You’re nothing but a liar and a control freak. You’re trying to refute these allegations because they would cost you your job.”

Murphy, who took part in a charity boxing matches with the police, denied this and also claimed he would never hit a woman.

However, Sheriff MacNair said that Murphy’s “bizarre” behaviour in the video helped him form a view about who was telling the truth about the incident.

The couple, who have two children together aged three and eight, are now going through divorce proceedings.

Sheryl Higgins wrote a victim impact assessment to the court in which she said she never wanted to have any future contact with Murphy.