Five months for youth who spat in face of paramedic 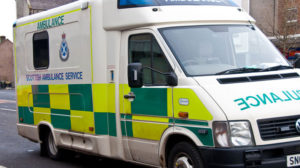 A Dunfermline youth is behind bars after spitting in the face of a paramedic who was trying to help him when he was in a drunken state.

Taylor Cockerill then spat on a police sergeant and his behaviour has resulted in him being sent to the young offenders’ institution.

He previously appeared from custody and admitted that on 17th February at Campbell Street, he assaulted an ambulance paramedic by struggling with him and spitting in his face.

He also admitted that on the same day at Dunfermline police station he assaulted a police sergeant by spitting on his body.

Depute fiscal Claire Kennedy told the court that at 12.30am police attended and were so concerned at his level of intoxication that they called an ambulance to check on him.

At 1.10am one of the paramedics went into the ambulance to assess the accused, who was sitting on the floor.

“The paramedic leaned down to speak to him and the accused turned his head and spat on him. He then struggled with the paramedic as an examination as being attempted.”

Cockerill was then taken to the police station and at the custody deck spat on an officer.

The court was told Cockerill was already on a community payback order for previous offending.

Defence solicitor Peter Robertson said, “He was under the influence and doesn’t have any recollection.”

Sheriff Craig McSherry told Cockerill, “I regard spitting in someone’s face as being extremely serious.” He sentenced Cockerill to five months’ detention.