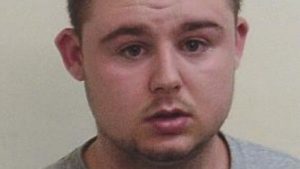 A 20-year-old Fife man has admitted murdering his neighbour in Glenrothes in a brutal knife attack.

Love (pictured above) later said he was proud of himself for the killing.

At the High Court in Glasgow today, judge Lord Matthews deferred sentence on Love, who is in custody, until next month for background reports.

Love, a first-time offender, confronted Mr O’Farrell over allegations he had heard. Mr O’Farrell had denied the accusations.

Later that morning Love went to Mr O’Farrell’s house, armed with two knives. He stabbed him three times in the chest and back. One knife was left embedded in his back and the blade of the other knife was left in his chest.

After the attack Love, who was upset and crying, went to his parents’ home and confessed, “Help me, take me to the police station. I think I’ve killed somebody.”

Love later added, “I’ve got anger management issues and I black out. I turned him over and I watched him taking his last breath. I’m sad, but a part of me is proud of myself for doing it.”

Defence QC Ian Duguid said, “This is a rather sad and sorry case. In an emotional over-reaction to what he had learned that there were two alleged incidents, sexual assaults on two 14-year-old girls, in a house.

“This was the catalyst which brought about the death of this man. Mr Love became very angry.

“This is a 20-year-old first offender who has no record of acting in a violent fashion. He initially said he was proud of what he did. That is not a sentiment he continues to hold.”

Lord Matthews told Love, “There is only one sentence I can impose and that is a life sentence. But I must set a period of custody that you must serve before you are eligible for parole.”