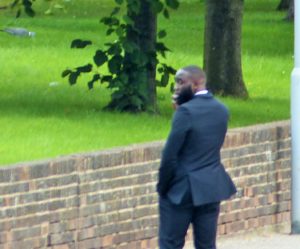 Boozed-up footballer David Banjo wandered off injured after smashing his Mercedes car into a museum.

He was found by police officers investigating the prang in the early hours of the morning and taken to hospital.

The Elgin City player had been drowning his sorrows with cocktails at a Dunfermline nightclub following a 4-0 defeat.

After the drinking session, 27-year-old Banjo decided to drive home and wrote off his car by flying off the road into the side of the Andrew Carnegie Birthplace Museum.

After receiving hospital treatment Banjo, of Tirran Drive, Dunfermline, then spent the rest of the weekend in police custody.

He returned to Dunfermline Sheriff Court today and admitted driving while being unfit to do so through drink or drugs on 29th July at the Carnegie Birthplace Museum, Moodie Street.

Depute fiscal Jamie Hilland said, “At 3.50am two police officers spotted the accused walking in Nethertown Broad Street and spoke to him about an earlier matter.”

When quizzed about the nearby accident, Banjo told the police, “It was me driving.”

He then gave a positive reading in a roadside breath test before being taken to hospital because of a head injury he had sustained. 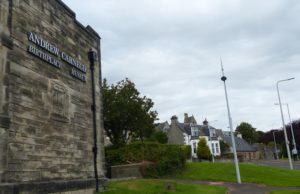 Defence solicitor Jonathan Matheson-Dear said, “He’s a professional footballer with Elgin City and drives there from his home in Dunfermline for training and matches.

“He had been playing that day and afterwards went out with friends. He came back to Dunfermline to Lourenzo’s nightclub and then on to a friend’s home.

“He had been drinking cocktails before heading home in the middle of the night. Because it had been or two since his last drink he thought he may be fit to drive.

“He was then in an accident and his car was written off. He fully admitted his involvement when approached by the police and was then taken to hospital with a head injury.

“He’s deeply ashamed that he’s appearing on court today. Because of his high-profile occupation there’s been a lot of comment on social media and press coverage.

“That’s been distressing but he understands he brought this on himself by stupidly and foolishly driving his car when he was not fit to do so.

“He hopes to continue playing with Elgin City who have been very supportive. There are other players in the team who can pick him and drive him to training and matches.”

Sheriff James MacDonald banned Banjo from driving for 18 months and fined him £900.

Banjo played for Elgin in their 4-0 home defeat to Dundee United in the Betfred Cup just hours before the offence.