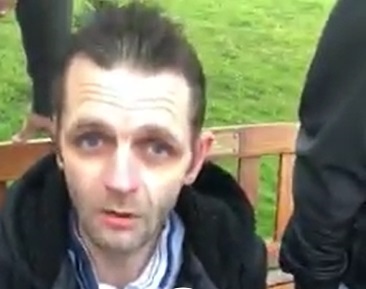 An online child sex predator was caught by a paedophile hunter group when he sent indecent images and video to what he thought was a 12-year-old schoolboy.

David Jackson said he wanted to meet the boy for sex and told him to make sure his parents did not see the messages on his phone.

However, the 12-year-old boy ‘Cameron’ was in fact a decoy set up by the Wolf Pack Hunters UK group to expose child sex offenders.

Jackson (37),  previously of Kelty and now living in Kirkcaldy, admitted two offences when he appeared at Dunfermline Sheriff Court today.

On various occasions between 15th April and 26th May at his home in Backfaulds Place, Kelty, and elsewhere he sent sexual images and a video containing sexual images to an adult posing as a child under the age of 13.

On various occasions between 15th April and 26th May at Backfaulds Place and elsewhere he sent sexual communications to an adult posing as a child.

“These individuals will say they are a child and then record on-line conversations.”

In this case a profile had been set up purporting to be a 12-year-old boy called Cameron.

Jackson contacted this profile and began to engage in a “sexualised conversation”, added the depute.

At one point, Jackson posted, “I’m 25 years older than you.”

When Jackson said the boy was “intelligent”, Cameron wrote back saying he tried to “do my school work”.

Jackson told the decoy, “Make sure you parents don’t go through your phone” and asked, “Can I trust you?”

Other posts included, “Mind delete this before you crash out. I’m not going to be able to chat to you if I’m in jail LOL.”

The depute went on, “The accused said he wanted to meet him and perform sexual acts on him.”

Police were contacted by the group and when officers spoke to Jackson he said, “I was chatting to someone online.” His mobile phone was seized.

Sheriff James MacDonald called for reports and bail was continued. Jackson was placed on the sex offenders register and will return to court for sentencing on 26th September.

Jackson was confronted by the group when he went to Dunfermline’s Pittencrieff Park after arranging to meet the decoy.

The ‘sting’ incident was shown live on social media and the video has been viewed more than 200,000 times.