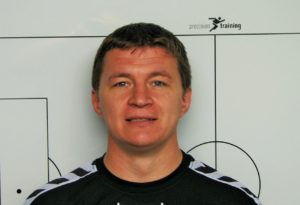 Kelty players broke off from their post-match warm down to jump over the barriers and confront boozed-up visiting fans after the repeated taunts aimed at their team-mate Craig Thomson, convicted of sex offences when a player at Heart of Midlothian.

The violence resulted in two Kilwinning supporters being seriously injured and both required to have plates inserted in their faces.

Accused of the assaults was Kelty Hearts club stalwart Stefan Winiarski, who has served them as a player, assistant manager and head of community club development.

However, on the second day of a jury trial at Dunfermline Sheriff Court, the charges against Winiarski were dropped and he was formally acquitted.

Winiarksi (40), of Kelty, had denied that on 18th February last year at Kelty Hearts Juniors FC, he assaulted James McComb by punching him on the head to his severe injury, permanent disfigurement and permanent impairment.

He also denied that he assaulted Darran Telford by punching him on the head to his severe injury.

James McComb (33), from Kilwinning, admitted he was “a bit tipsy” by the end of the game having started drinking on the mini-bus from Ayrshire.

He said that at the end of the match – won 2-1 by Kilwinning – ­he was walking towards the exit when he got into an argument with someone from the home club who was retrieving a corner flag.

“There were a few swear words exchanged on both sides. I said to him, ‘It’s just a game of football. There’s no need to act like that just because your team lost.’

“He held up the corner flag as if he was going to hit me with it.”

As he continued to walk towards the exit he was struck to the left side of his face. “I can’t remember much. I just fell or crouched down, I think.”

He had sustained a fracture to an eye socket and required surgery which involved a titanium plate being inserted into the left side of his face.

Mr McComb said he has been left with no feeling in the injured part of his face and has also lost his sense of smell. He told the court he did not know who it was who struck him.

Darran Telford (44), from Kilwinning, travelled through on the same mini-bus.

He said, “There was quite a good atmosphere at the match but in the last ten minutes the Kilwinning fans found out something about one of the Kelty players.”

Thomson was then targeted for abuse with shouts of “paedo” by some fans but he had not been involved in this, said the witness.

“There was a commotion behind the goals and I saw James McComb was in the middle of it.

“I saw James on the floor and wanted to see if he was okay. He was covering his face and was covered in blood.

“There were committee members there and I couldn’t get close to James because I was punched.”

Mr Telford went to hospital the next day and it was found he had a fractured cheek bone which required an operation to have a metal plate inserted.

Defence solicitor Stephen Morrison put it to the witness that he had “waded in with arms flailing and punched Mr Winiarski” but he denied this.

Kelty Hearts player Stephen Husband (27) described the scenes after the match. “Their fans were being drunk and disorderly and I was trying to calm them down.”

He said he was one of the Kelty players who had jumped over the barrier but this was only to “protect the committee men who were over there”.

“Looking back now it probably wasn’t a good decision to be jumping over the fence,” admitted the former Dunfermline Athletic player.

Christopher Strain (38), the manager of Kilwinning Rangers, told the court he became involved in the incident trying to calm down the visiting fans.

“I was delighted having won as under-dogs and didn’t want anything to taint the occasion,” he told the court.

Mr Strain saw Darran Telford being punched but did not know who had struck him.

Stefan Winiarski was rewarded for his service to Kelty Hearts with a testimonial match against Rangers in 2012, which attracted a record home attendance of 2300.