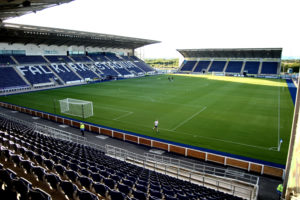 Police have arrested a 25-year-old man after coins were thrown at a Dunfermline Athletic player during a match against Falkirk.

The incident took place on 6th October at Falkirk Stadium when coins were thrown at a Dunfermline player. The coins missed and no one was injured.

Inquiries have been ongoing since then and a 25-year-old man has now been charged in connection with this. He is expected to appear at Falkirk Sheriff Court at a later date.

Detective Sergeant Kenny Halliday, Forth Valley’s Dedicated Football Officer, said, “Throwing items on the pitch or at people is a reckless and disruptive act.

“We remain committed to pursuing those who attempt to cause others harm and ruin the game for the majority of responsible fans.”