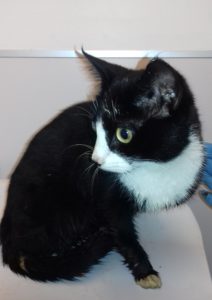 A black and white cat is recovering after rescued by a member of the public after being abandoned in a bin liner in the Fife countryside.

The Scottish SPCA was alerted by a member of the public who discovered the female cat on a small layby of the A909, an entry point for Cullaloe woods, near Burntisland.

The cat, which has been named ‘Clover’, was left in a plastic pet carrier which was then placed in a bin liner and dumped at the side of a road.

Scottish SPCA inspector Sarah Gregory said, “This little cat is lucky she was discovered by a vigilant member of the public who knew something wasn’t right as she could have easily been missed.

“We are unsure how long she was left outside for and we are keen to find the person responsible for abandoning her in this deliberate and cruel way.

“She doesn’t appear to have any signs of injury but was covered in urine and faeces when we found her. She is currently being cared for by the staff at our centre in Edinburgh and has been named Clover.

“If anyone in the area recognises her or has any information on who may have abandoned Clover, we would urge you to call our confidential animal helpline on 03000 999 999.”