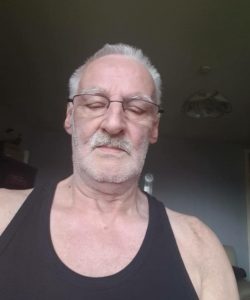 A Fife pensioner, who sent naked pictures of himself to a 14-year-old girl and asked her “Do you want a baby?”, has been sentenced to 18 months’ supervision.

Sick on-line predator Ronald Myers (69) also sent an image of his penis telling the girl, “That is what makes babies” and added, “You can see the real thing when you get here babe.”

However, his target, teenage girl ‘Shazza’ was in fact a decoy set up by paedophile-hunters who then turned up at Myers’ door in Kelty.

The doorstep confrontation was shown live on Facebook with Myers admitting he had asked the ‘Shazza’ to move in with him.

Myers, previously of Ore Valley, Cardenden, and now living in Dysart, appeared in the dock at Dunfermline Sheriff Court.

He previously admitted that between 15th and 21st August at his then home in Loch Leven Terrace, Kelty, he sent messages of a sexual nature to a person he believed was under the age of 16, attempted to cause them to look at a sexual image and via on-line applications sent still images and video images of a sexual nature.

Myers was caught in a sting operation set up through two paedophile-hunter groups, the ‘Children’s Guardian’ and ‘Justice for the Innocent, Scottish Division.”

Initial contact took place on an app called ‘Tagged’ then moved on to ‘WhatsApp’.

Miles Manning, who set up the profile, began talking to a male with the profile name ‘Ronnie M’ on 15th August.

“Between 15th and 21st August various exchanges took place between the accused and the decoy. During these exchanges the decoy stated she was 14 years old,” added the depute.

The messages sent to ‘Shazza’ by Myers included, “Do you want a baby honey?” and “I slip it inside and work it back and forth until I orgasm and shoot my sperm inside you”.

Myers then sent an image of himself naked with a semi-erect penis with the comment, “That is what makes babies” and added, “You can see the real thing when you get here babe.”

The paedo-hunters obtained Myers’ home address and turned up at his door at around 7pm on Wednesday 18th August with the confrontation being streamed live via Facebook.

During the conversation, Myers admitted that he had been talking to a 14-year-old girl on-line before being told this was a decoy.

He also admitted inviting the girl to move in with him.

During the streamed conversation Mr Manning spoke to Myers via a phone link and asked, “You think it’s okay to ask a 14-year-old girl to go and live with you?”

Myers replied, “I was going to look after her.”

The court was told Myers was a retired bus driver and had lived alone since being divorced in 1982.

Sheriff Craig McSherry imposed a community payback order with 18 months’ supervision and Myers has been placed on the sex offenders’ register.