Early release prisoner back inside after High Street assault 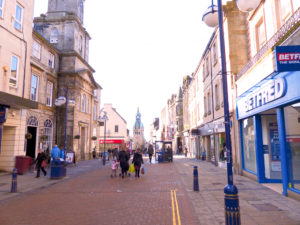 A Fife man, who committed an assault in Dunfermline High Street after being given early release from jail, is back behind bars.

He previously admitted that on 15th July at High Street, Dunfermline, he assaulted a man by repeatedly punching, kicking and stamping on his body to his injury.

She told the court people known to the accused were in Dunfermline High Street. Bernard ran up to the complainer who believed he was going to be assaulted and lashed out, striking him on the chest.

“The accused then got up and stamped on the complainer’s chest.”

The incident was captured on CCTV and the operator contacted police.

When detained, Bernard said to police, “Why is he not in custody? He is the one that assaulted me.”

Defence solicitor Ian Beatson said his client had a long-standing drug problem. Of the incident he said, “He knows he shouldn’t have run over and got involved.”

Bernard was still on licence from a previous jail term having been given early release when he committed this offence.

Sheriff Charles MacNair told Bernard, “You have a truly appalling record.” He jailed him for 160 days.