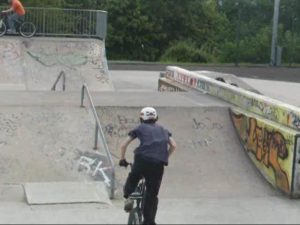 A youth was threatened by a 24-year-old man with a knife at a skate park in Dunfermline.

Thug Michael Sanderson was in possession of a combined knife and knuckle-duster during the incident and was today jailed for seven-and-a-half-months.

The threats were made after Sanderson’s group was challenged over smashing bottles in the park by a young skater.

In a previous incident, Sanderson was spotted on CCTV walking through Dunfermline town centre at 10pm with another offensive weapon, a cricket bat.

He previously admitted that on 10th March at Queen Anne Street, Dunfermline, he was in possession of an offensive weapon, a cricket bat.

He also admitted that on the same day he was in possession of cannabis resin.

He later admitted that on 18th October at St Margaret’s Drive, Dunfermline, he behaved in a threatening or abusive manner by shouting, acting aggressively, challenging a 17-year-old boy to fight and producing a knife/knuckle duster.

Of the first incident, depute fiscal Azrah Yousaf previously told the court, “At around 10pm a CCTV operator became aware of the accused walking through Dunfermline town centre with a cricket bat.

“He was carrying it openly near the bus station. At one point he put it into a holder then took it back out.

“Police attended and by then the cricket bat had been disposed of by one of his friends. However, officers found the bat which had been thrown over a wall.”

Sanderson told police, “I had a ball and everything. I had played cricket earlier.”

In the later offence, the 17-year-old youth was playing at the skate park with three friends from 8.30pm.

“At 9.20pm they became aware of bottles smashing at the top end of the skate park. They went to investigate and saw a group of males and females.

“The complainer asked the group to tidy up the mess and an argument then took place,” the depute previously told the court.

When the youth walked back towards the other end of the park he was followed by Sanderson who was by now angry.

“He took a knife with a three to four-inch blade from his jacket pocket and continued to shout.”

With the knife in his hand he challenged the youth to a fight before being led away by other members of his group.

Sheriff Charles MacNair had previously delayed sentencing so that he could see the offensive weapon for himself.

After looking at it he commented, “This weapon is at the higher of these offences.”

He jailed Sanderson for 81 days for the first offence and a consecutive five months for the skate park incident.