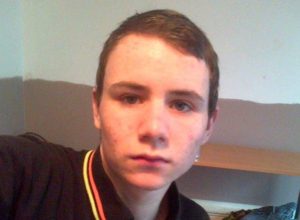 A drunken lout caused £30,000 worth of damage to a Fife primary school in a vandalism spree.

Benarty Primary School in Lochore had to be closed for several days after it was trashed by local man Dale Richardson (pictured above), who claimed later he could remember nothing about it.

Members of the public went to investigate after the alarm was activated but Richardson continued to smash windows, doors and computers.

The court was told that at 7.15pm Richardson was caught on CCTV cameras attempting to enter the school via a door.

At this time the alarm was activated, attracting the attention of members of the public in the area.

One of these people went over to the school and saw Richardson in the dining room picking up items and smashing them on the floor.

Richardson looked directly at this person then continued to smash up the property.

CCTV footage then showed Richardson on a child’s scooter, which was owned by the school.

Police were contacted and arrived just after 7.30pm. Officers saw a broken window and could hear noise coming from the far end of the school.

They then saw the accused escaping from the area via a garage roof but he was detained at around 8.20pm.

When interviewed by police Richardson said he was not responsible and claimed it must have been someone looking like him.

Defence solicitor Alexander Flett said his client has a “learning difficulty” and was extremely drunk at the time.

“He has no recollection of being at the school. He had been drinking alcohol with family members,” added the solicitor.

“It was something of a surprise to him when he was questioned by police about the matter.”

Sheriff Charles MacNair told Richardson, “This was a remarkable piece of malicious damage. You went to the school and were clearly there for some time causing damage throughout.

“The school was closed for some days which would have had an impact on the children and their families.

“You continued to cause damage even when witnesses came into the school. You are perhaps fortunate that you’re not on indictment for this offence.”

The sheriff jailed Richardson for 220 days.

At the time of the incident a Fife Council spokesman said, “Over the weekend, an individual broke into Benarty Primary School and Nursery and caused damage to the building and its contents.

“Internal and external windows were smashed and equipment was damaged.

“Teams are on site repairing the damage and cleaning up the mess left.

“This is a really disturbing and upsetting event for the whole school community, especially the pupils.”