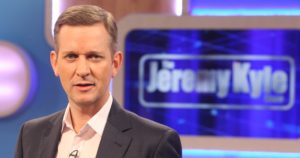 A violent row over appearing on the Jeremy Kyle Show has resulted in a nine-month custodial sentence for a Fife man.

Dale Richardson (20) threw a brick through a woman’s window, narrowly missing her, after she refused to take a lie-detector test on national TV.

He wanted to go on the show to settle a dispute about a “dalliance” he had with the woman who lived near him.

She told her boyfriend that nothing took place but Richardson thought he could prove it did on television.

All three had originally agreed to go on the show but when the woman changed her mind, a furious Richardson threw a brick through her window.

Defence solicitor Alexander Flett said, “The woman involved was in a relationship with someone else. She and Mr Richardson had something of a dalliance but she denied this.

“He was upset about this and they came to an agreement that they would all go on to the Jeremy Kyle Show to sort it out.

“It has to be said that’s not something that would be likely to reduce the temperature in the situation.

“Having agreed to go on the programme she then decided this wasn’t going to happen. He became upset about this and threw a brick through her window.”

Richardson was originally given a community payback order but was back in the dock at Dunfermline Sheriff Court after breaching it.

He had also been placed on court orders for vandalising cars and twice being in possession of a knife in public.

Richardson, of Ballingry Road, Ballingry, had previously admitted a string of offences.

On 15th August last year at Ballingry Road he behaved in a threatening or abusive manner by shouting, swearing and throwing a rock through a window.

On 9th October at Lochleven Terrace, he was in possession of a knife.

On 29th October at Westwood Crescent, Ballingry, he repeatedly struck three cars causing damage to them.

On 6th November he breached bail conditions to remain in his home and had a knife in his possession at Lochleven Road, Lochore.

Sheriff Charles MacNair said, “You were given the opportunity of a non-custodial sentence and you failed dramatically to comply with these orders.” He sentenced Richardson to nine months’ detention.