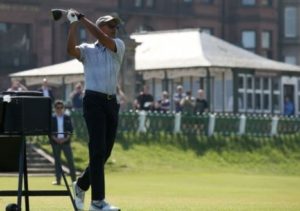 Former US president Barack Obama has enjoyed a round of golf at St Andrews on his first visit to Scotland.

He arrived in Edinburgh by private jet this morning ahead of a charity event later.

However, his first stop was Fife’s home of golf, where he played on the Old Course in glorious sunshine.

After completing the third hole, Mr Obama spoke to the crowd who had been following him around the course, shaking hands with them and asking how they were before returning to his golf.

The charity dinner at the EICC is be one of his first major addresses since his term as president ended.

All of the cash raised will be split between children’s charities in Scotland and the Obama Foundation.