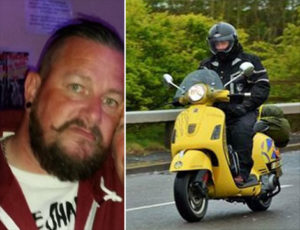 A 46-year-old man has died after crashing his scooter on a Fife road.

He has been named as father-of-two Stuart Bousie, aged 46, from the St Andrews area.

Stuart, who was riding a yellow Piaggio Vespa, died at the scene of the accident near Kettlebridge on Sunday.

He was returning from a scooter rally and was travelling north on the A914 when he left the road.

His family said in a statement, “We are deeply shocked and saddened at the sudden loss of Stuart.

“He was a much loved son of Margaret, father to Emma and Laura and husband to Katherine and he will be greatly missed by his family and all who knew him.

“He was an avid member of the Lone Sharks Scooter Club and was coming home from a great weekend at his first scooter rally of the year when he tragically lost his life.

The road was closed for about four-and-a-half hours while accident investigators worked at the scene.

Police Scotland have appealed for witnesses to the accident to come forward.

Sergeant Ewan Pearce, of Glenrothes road policing department, said, “This collision has tragically resulted in the death of a man.

“The scooter is a very distinctive yellow and I would urge anyone who saw it prior to the incident or was on the A914 near to Kettlebridge around this time and witnessed the collision to contact us immediately.”