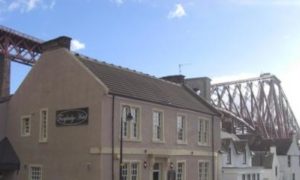 A 49-year-old woman caused mayhem at a wedding by spitting on a fellow guest, viciously attacking a female hotel worker then spitting at police officers.

Linda Dallas was heavily drunk at the wedding in North Queensferry and dragged the hotel worker to the ground by the hair after being told to leave at closing time.

Dallas was there as her partner was father of the bride and she was involved in three separate incidents with her behaviour described as “particularly disgusting”.

Despite this, Dallas managed to avoid any financial penalty, unpaid work or a restriction of liberty order when she appeared for sentencing at Dunfermline Sheriff Court .

Dallas, of Gilmerton Dykes Gardens, Edinburgh, previously admitted that on 6th May at the Ferrybridge Hotel she assaulted a man by seizing hold of him by the arm and spitting on his face.

She also assaulted a female hotel employee by seizing her by the hair and pulling her to the ground by the hair, all to her injury.

She further admitted assaulting two police constables by spitting at them.

Depute fiscal Jane Rennie told the court that Dallas was at the hotel for a wedding, with the bride being the daughter of her partner.

“The ceremony took place during the afternoon and the accused was already heavily under the influence of alcohol.

“At 7pm the accused went to the front door where the bride’s step brother was smoking. She began to shout and swear and was making derogatory comments about the bride which caused offence.

“He challenged her and told her she was out of order. She grabbed his arm and spat on his face.

“At 12.45am a member of staff was closing up when she saw the accused within the premises at a side door.

“She told her she wasn’t allowed in the premises and had to leave. At this point, the witness was locking the door.

“The accused grabbed her by the hair. She was staggering due to her being drunk and as she fell over she took the witness down to the ground with her.

“The witness was calling for help. She managed to break free and contacted the police.”

When officers arrived and detained Dallas she began struggling and attempted to spit on both officers.

Defence solicitor Angus McLennan said, “It had been an eventful day for all concerned but she has little recollection of it because of the amount of alcohol consumed.

“The trigger had been when she was asked to move from where she was sitting.

“She went out of the hotel to another public house and started slamming the drinks down and things became very hazy from then on.”

Sentence was previously delayed because Dallas was abroad on holiday.

However, she decided not to order Dallas to pay compensation to the victims because she has a joint benefits claim with her partner, as neither of them work.

The sheriff said a compensation order would mean her partner would be penalised as well as Dallas.

She sentenced her to a community payback order with 12 months’ supervision.