Banned driver legged it over fields and motorway pursued by police 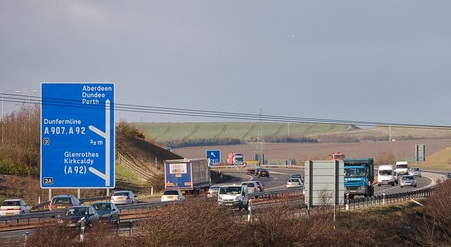 A disqualified driver jumped over a barrier and ran across fields and a motorway after being stopped by police.

Peter McLaren got behind the wheel just days after being banned and has now been jailed.

He admitted that on 13th October on the A92 westbound between Cowdenbeath and Halbeath, he drove while disqualified and without insurance.

Depute fiscal Dev Kapadia said, “At 5.40pm police officers on mobile patrol carried out a PNC check on a vehicle in front of them and discovered it had no insurance.”

McLaren was signalled to stop and did so. He told officers he was unaware the car was not insured.

The depute went on, “He was asked to sit in the police vehicle but jumped over a barrier and ran down the embankment towards the M90.

“The officers are described as being in hot pursuit of him. The accused ran across both carriageways of the M90 but both officers caught him up and he was finally apprehended after running up an embankment and into a field.”

Defence solicitor Alexander Flett said, “He panicked because he was disqualified and he ran away.”

Sheriff Charles MacNair told McLaren, “You were disqualified from driving for six months on 2nd October. Less than two weeks later you decided that you would ignore that ban and drive.”

He jailed McLaren for five months and banned him from driving for 20 months.