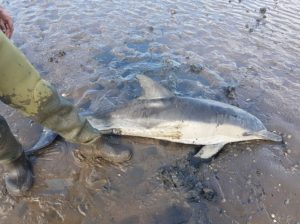 A young dolphin has been rescued after beaching at St Andrews today.

It was spotted by dog walkers after it became stranded on the West Sands and they alerted staff at the nearby St Andrews Aquarium.

They kept it wet and helped staff from the aquarium to return it to the water.

The dolphin, believed to be around two years old, was later seen swimming strongly in the Eden Estuary, with the tide coming in.

The Aquarium posted, “A very lucky young man just refloated by the Aquarium Keeping Team off the west sands. Many thanks to the two members of the Public who called this in and helped out and to the 2 mounted police for watching over us.”