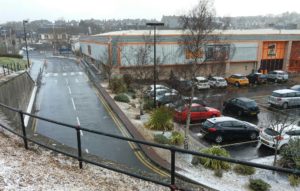 A drunken lout, who brought traffic in Dunfermline town centre to a halt by throwing bricks at vehicles, has avoided a custodial sentence.

James Haggerty (19) hurled rocks at cars and buses then threatened police with a pole. He later asked how many hits the incident would receive on Facebook and YouTube.

The town centre traffic was at gridlock during a tea-time rush hour when road closures were put in place.

Police officers were brought in from outside Fife to help cope the escalating situation before Haggerty finally gave himself up.

When he appeared for sentencing at Dunfermline Sheriff Court today, defence solicitor Katrina Clark asked for “pity and leniency” to be shown.

She said he had been assaulted during his time on remand at Polmont YOI. “He fears for his life,” she told the court.

Haggerty previously admitted that on 23rd January in Carnegie Drive, he conducted himself in a disorderly manner by repeatedly shouting, swearing, brandished metal poles, challenged the police to fight, made threats to harm himself and committed a breach of the peace.

He also admitted the he culpably, recklessly and with utter disregard for the consequences, repeatedly threw stones, rubble and metal objects from a height of 20 feet at moving traffic, patrol cars and police officers, uprooted a power cable to the danger of people.

Depute fiscal Sarah Lumsden previously told the court the incident occurred after police tried execute an arrest warrant granted after Haggerty failed to turn up for a court date.

At around 3.40pm a detective was on the phone to Haggerty when he told him, “Look over to B&Q.”

Haggerty had climbed up on to a ledge above the car park at a retail park and told police he had taken “14 Valium, speed and four bottles of alcohol”, said the depute.

Haggerty began to throw stones at police vehicles arriving at the scene, striking their windows.

Road closures were put in place and these were extended as the incident continued.

He shouted at police, “Come on, do you want some?”

Other officers were called in from Glenrothes and Edinburgh and protective clothing was used as Haggerty brandished a metal pole.

He also continued to throw stones at police and rocks at passing buses and so both carriageways of Carnegie Drive were closed.

A group of people gathered and there was “hostility shown from the crowd to the accused”.

He finally gave himself up to police at 5.40pm.

Haggerty, whose mother lives in Methil, was staying in Mackie Place, Dunfermline, at the time. He was already on a community payback order.

However, he decided instead to impose another community payback order with three years’ supervision and a ten-month restriction of liberty order.

The court was told that social workers had found new accommodation for Haggerty outside the Dunfermline area.