Naked woman caught perv spying on her at Fife pool 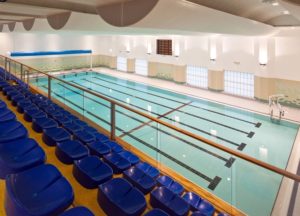 A young woman was shocked to see a male peering down on her as she used a changing cubicle at a Fife swimming pool.

The woman was naked at the time as Sean Adam looked over from the next cubicle.

A terrified Adam then remained in the locked cubicle after the woman’s partner found out what had happened and kicked his door shouting “Perv”.

Adam later asked to be allowed to leave by a back door because he was too scared to go out the main exit.

The incident after the couple had gone with their kids to the pool at Carnegie Leisure Centre in Dunfermline.

Adam (18), pictured below, went on trial for voyeurism at Dunfermline Sheriff Court.

He was found guilty of a charge that on 5th May last year at Carnegie Swimming Pool, Pilmuir Street, he observed a woman by peering into a changing cubicle occupied by her when she was in a state of undress.

Adam, from Dunfermline, claimed he had stood up on a bench in the cubicle to “drip dry” after leaving his towel in the shower area.

However, the sheriff did not believe his story and Adam is now on the sex offenders’ register.

The 24-year-old victim told the court she had been at the pool with her partner and their children.

She left the pool first to get changed and was then going to help the children after their swim.

She had removed her swimsuit and was naked when she looked up and saw eyes peering down on her.

“When I looked up there was a head looking over. I saw the hair, the top of the head and the eyes. It was a male,” she said.

She then put her clothes on and left the cubicle to tell her partner and a member of staff.

The cubicle where Adam was remained locked while this was going on and the woman then contacted the police.

Depute fiscal Azrah Yousaf asked the woman, “How did you feel when this happened?”

She replied, “A bit shaken up. I was concerned that children were there getting changed as well.”

She said she had never been back swimming at the pool because of the incident.

Graham Smith, 35, was duty manager at the pool on the day of the incident.

He said after being told of what had happened, he waited outside the cubicle for ten minutes before Adam emerged.

He said the woman’s boyfriend had kicked the door and shouted “perv” and Adam was “nervous”.

The manager asked Adam to accompany him to his office to speak about what had happened.

“He kept saying ‘I’m sorry’ before I’d even said what the allegation was,” said Mr Smith.

“He said he stood on the bench because his clothes had fallen on the floor and he didn’t want them to get wet. It seemed a bit odd. If my clothes fell on the floor, I’d just pick them up. I wouldn’t have stood on a bench.”

He added, “He was scared and nervous and didn’t want to leave the centre by the main door. I let him out by a back door.”

Adam told the court he attended at the leisure centre regularly.

He said he left his towel at the showers and instead of going back for it decided to “drip dry” standing up on the bench but denied looking into the woman’s cubicle.

He said he replied to her, “Sorry, I didn’t look over.”

Depute fiscal Azrah Yousaf asked Adam why he had apologised if he had not done anything wrong.

“In case there had been a misunderstanding I just apologised,” he answered.

Sheriff Charles MacNair told Adam he did not believe his version of events and found him guilty.

The sheriff called for reports and Adam was placed on the sex offenders’ register. He will be sentenced on 23rd July.