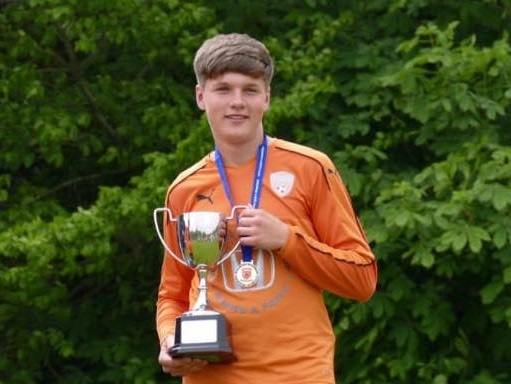 Tributes have been paid to Fife teenager killed in a road accident as he travelled to play in a football match yesterday morning.

Ethan King (17), from Kirkcaldy, died in the one-vehicle incident on the A915 Standing Stane Road between Kirkcaldy and Methilhill shortly before 8.45am.

Three other teenagers were seriously injured in the crash and are in hospital.

Ethan, a former pupil of Kirkcaldy High School, was pronounced dead at the scene.

Two youths, aged 17 and 18, also from Kirkcaldy, were taken to the Royal Infirmary in Edinburgh.

Another 17-year old man, who is believed to have been driving the black Vauxhall Corsa involved in the crash, has been arrested and is receiving treatment for serious injuries at Ninewells Hospital in Dundee.

It is believed the youths were on their way to play for their football team Glenrothes Athletic.

The club released a statement last night saying,“It is with great sadness that we have to announce the passing of our under 19s player Ethan King, who tragically died in a car accident this morning.

“Ethan has been a member of the team for many years, progressing through from 7-a-side to our under 19s squad, and was a crucial member of the treble winning team in season 2016/17.

“The thoughts and prayers of everyone at the club are with Ethan’s family at this difficult time.

Air ambulances were called to the scene and flew the injured to hospital in Edinburgh and Dundee.