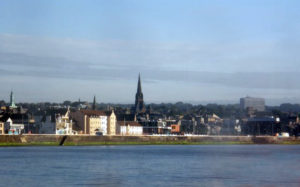 A drug addict who entered a Kirkcaldy house to steal and also repeatedly targeted local shops has been jailed for two years.

Craig Paterson (32), a prisoner at Perth, went on a crime spree when his drug-taking spiralled out of control.

He appeared at Dunfermline Sheriff Court and admitted a string of offences.

On 11th December at Boots, Central Retail Park, Kirkcaldy, he stole fragrances worth £120.

On 20th December, at an address in Kennedy Crescent, Kirkcaldy, he stole a bank card.

On the same day, at the Shell garage, Hendry Road, Kirkcaldy, he used a debit card to obtain goods worth £10 by fraud.

Depute fiscal Dev Kapadia said that Paterson was spotted on CCTV at Boots stealing fragrances and police contacted to view the video identified Paterson as the thief.

On 20th December, a resident in Kennedy Crescent woke up to find his bank card when he had left on his bedside table was missing.

He got up to find a window had been forced upon. He contacted the police and also his bank who told him a transaction had been made on his stolen card.

Paterson had used the card to buy tobacco at a garage on Hendry Road at 6.47am. CCTV images captured him carrying out the fraudulent purchase.

Paterson then repeatedly targeted Debenhams stealing fragrances worth over £1300 over the space of five days.

On 4th, 7th and 8th January he took fragrances from a cabinet display, took them upstairs, removed security tags and left without paying.

Defence solicitor Christine Hagan said her client had a long-standing drug problem and was using heroin “on a very regular basis”. He then needed to find even more money when there was a local shortage of heroin and he started taking cocaine instead, she added.