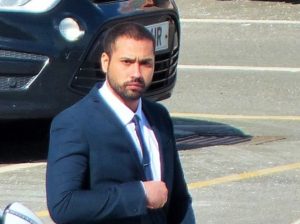 A drunken sailor sparked mayhem at a wedding by groping the bride, spitting into drinks then urinating in front of guests.

Gate-crasher Glen O’Connor, a leading hand in the Royal Navy, tried to kiss the bride’s hand then touched her backside.

He was confrontational with guests, spat in their drinks and was put out of the hotel when he tried to urinate against a door in the venue.

When he was finally put out, he relieved himself in the hotel car park as guests looked on.

O’Connor is currently based at the HMS Caledonia base in Rosyth and had gone to watch a televised football match at a nearby hotel, where the wedding was taking place.

He began working his way through the whiskies on the bar’s top shelf before creating havoc with the wedding party.

O’Connor (32),  appeared at Dunfermline Sheriff Court today. He admitted that on 12th August at the Caledonia Hotel, Hilton Road, he behaved in a threatening or abusive manner, acted in an aggressive manner, attempted to kiss a woman on the hand, placed his hand on her body, repeatedly spat into the drinks of the hotel patrons, attempted to remove his penis from his trousers to urinate on doors there and then in the hotel car park removed his penis from his trousers and urinated.

Depute fiscal Claire Kennedy said the bride was at the hotel with her extended family to celebrate her wedding.

“Attention was drawn to the accused who was heavily intoxicated and behaving in a confrontational manner.”

He interrupted a conversation the bride was having with her mother-in-law and tried to kiss her on the hand.

“He then put his hand on her back and moved his hand down on to her bottom. She moved away out of his reach. She didn’t believe there was anything sexual about it, rather that it was the actions of a drunk man.

“The accused then began lifting other people’s drinks and was spitting into the glasses before placing them back down.

“The hotel supervisor asked him to leave. The accused then attempted to urinate on the hotel doors.

“The supervisor was able to get him out of the premises and into the car park where the accused began to urinate in full view of witnesses. The supervisor then contacted the police.”

Defence solicitor Elaine Buist said her client had been serving in the Royal Navy since 2003, his current rank was ‘leading hand’ and his ship will be at Rosyth until September 2019.

She went on, “He was not at the wedding but had gone to the hotel to watch a football match on TV.

“He began drinking from the top shelf of whiskies, working his way through them. He has no recollection at all after that. It is a matter of deep embarrassment to him to be in court for these matters.”

She said O’Connor had been accompanied to court by a warrant officer and would be facing disciplinary measures within the navy.

Sheriff Chris Shead described O’Connor’s behaviour as “pretty disgusting”. He told him, “This would have caused a great deal of unnecessary distress to people there including the woman whose wedding it was.”