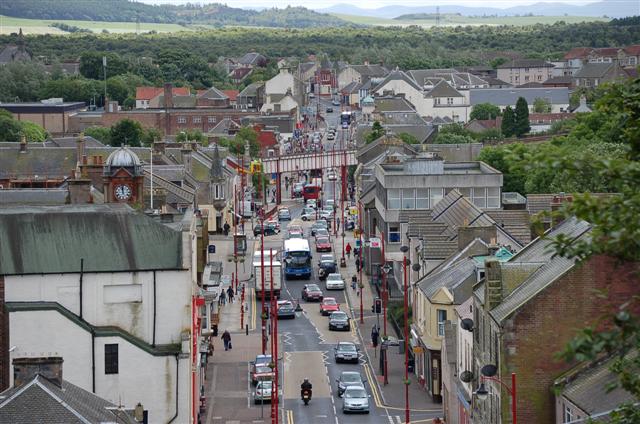 Violence outside a Fife house-warming party ended in tragedy when one of the guests had a bottle thrown into his face by a gate-crasher.

The victim, Stewart Drummond, lost the sight in an eye, which was struck by glass from the shattered bottle and later took his own life, a court heard.

The teenager who caused the devastating damage, Logan Docherty, was today sentenced to 18 months’ detention.

After a trial at Dunfermline Sheriff Court in November, Docherty and John Crawford were found guilty by a jury of offences committed in the early hours of the morning in Cowdenbeath High Street.

They returned to court today for sentencing.

The trial was shown CCTV of 19-year-old Docherty and Crawford, 18, both carrying bottles in the High Street shortly before the offences.

They tried to get into the building where the party was taking place and were confronted by four males, who went outside to the street to tell them to leave.

Crawford was brandishing a metal pole and Docherty threw the bottle from a distance of six or seven feet into the face of Mr Drummond.

The injured man was helped upstairs back into the flat by his friend with blood pouring from his wound before being rushed to hospital.

Docherty, of Johnston Park, Cowdenbeath, was found guilty of assaulting Stewart Drummond, now deceased, on 2nd December 2017 at High Street, by throwing a glass bottle at him, which struck him on the head causing the bottle to smash to his severe injury, permanent disfigurement and permanent impairment.

Crawford, of Primmer Place, Cowdenbeath, was convicted of a charge of shouting, swearing, repeatedly making threats of violence and brandishing a metal pole.

He was also found guilty of being in possession of an offensive weapon, a metal pole.

Crawford was put on a community payback order with two years’ supervision and 250 hours of unpaid work.

Paul Cunningham was at the party and was next to Mr Drummond in an alley outside the flat when he was injured.

At the trial, Mr Cunningham described the scene following Mr Drummond’s injury. “He had a massive cut over his eye brow. He was bleeding quite a lot,” he said,

By this time, Crawford was still “hyped up” and Docherty was “telling him to shut up”.

Mr Cunningham also heard Crawford saying, “I’ve got a blade. I’ll kill you all the noo.”

Depute fiscal Alex Kirk described the injuries to Mr Drummond saying, “He suffered a fracture right cheek bone, a fracture to an orbital bone, his eye was ruptured and he had lost the vision in it. It was not known if he would lose the eye.”

Sheriff Charles MacNair told Docherty, “The offence you were convicted of, throwing a glass bottle at Stewart Drummond had a very, very serious effect in that he was blinded in one eye.

“Clearly, we know now what he did later. That was perhaps or probably as a result of this, we don’t know. I can’t take that into account but clearly this had a significant impact on his well-being and it would have been a life-changing event.

“You may not have foreseen the precise nature of the injuries caused but you could have foreseen that your actions would cause significant injury. You did in fact cause horrific injuries to Mr Drummond, who, as the jury found, was doing nothing wrong.”