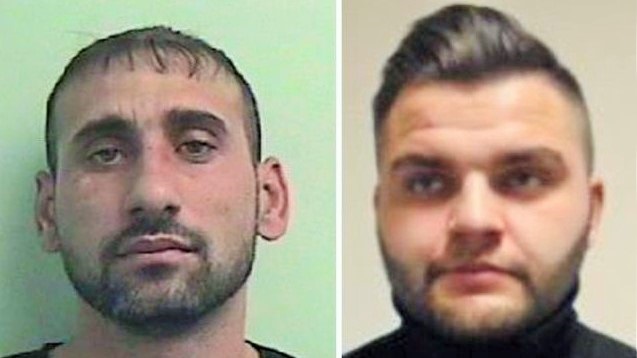 A young woman was picked up outside a Fife nightclub by a bogus taxi driver and subjected to a terrifying rape ordeal.

The victim , who had been on a night out in Kirkcaldy, was raped by the driver and then later by his friend.

The two scumbags have shown no remorse and their actions were described as “unspeakably wicked” by a High Court judge.

Abel Muntean (pictured right), who picked up the 18-year-old woman in the early hours of 1st January 2017 in Kirkcaldy, has been jailed for 10 years.

He abducted and raped the victim before taking her to a house where his accomplice, fellow Romanian Raul Novac, subjected her to a further rape.

Novac (34) was also jailed for five years following a trial in which the pair denied raping the woman but were found guilty.

He was sentenced to a further two years and three months after fleeing justice when he returned to Romania after being released on bail. He also failed to appear in court at an earlier scheduled hearing.

Judge Lord Uist told Muntean at the High Court in Edinburgh, “You were convicted by the jury of shocking, predatory and outrageous criminal conduct consisting of the abduction and two rapes of the same 18-year-old woman who was unknown to you.

“You waited in your car outside a nightclub in Kirkcaldy in the early hours of New Year’s Day 2017 as it was emptying, flashed your car lights to draw her attention to you, pretended to her that your vehicle was a taxi and that you were a taxi driver and so induced her to enter your car.

“You then abducted her in the car, drove to the Esplanade at Kirkcaldy, removed her dress and raped her…while she was intoxicated with alcohol and incapable of giving or withholding consent.

“You thereafter took her to the house of your co-accused and provided her to him so that he could rape her. In other words, you used her as an object for your own sexual gratification and that of your co-accused.”

Lord Uist said the woman, now 20, has suffered “permanent mental and emotional effects” as a result of her ordeal.

“Your behaviour towards her, which was obviously premeditated, can be described only as unspeakably wicked and wholly callous,” he told Muntean.

The judge pointed out that 19-year-old Muntean, from Glenrothes, continued to deny the offences and had shown no remorse. He said he posed a significant risk of further re-offending.

Lord Uist told Novac, “Your commission of this offence has been described as opportunistic but you also have continued to deny your guilt and shown no remorse.”