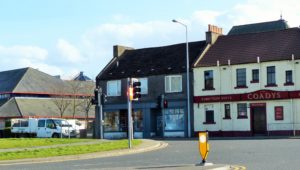 A speeding driver swerved, hit a kerb then smashed into the back of cars stopped at a red light in Dunfermline town centre, causing extensive damage.

The incident, next to a busy pub at 10.50pm Saturday night last summer, was captured on CCTV which was shown at Dunfermline Sheriff Court.

Dale Miller (24), of Inchkeith Drive, Dunfermline, admitted that on 25th June last year in Carnegie Drive, he drove a car dangerously, travelled at excessive speed, lost control of the car, struck a kerb and collided with vehicles causing damage to them.

The CCTV showed Miller’s car speeding towards a line of cars stopped at traffic lights. As he braked, he hit a kerb then crashed into the back of two stationary cars.

The video also showed the area was busy at the time with a lot of people standing outside Coady’s Bar, next to where the accident occurred.

Depute fiscal Dev Kapadia said, “One of the cars struck by the accused was a Volkswagen Golf and the amount of damage caused was £5800. The other vehicle only had minor scratches. The accused identified himself as the driver when police arrived.”

Sheriff Charles MacNair said, “This was a very bad piece of dangerous driving. Cars were stopped at traffic lights. You were going too fast and you went into the back of them.

“There were pedestrians in the vicinity as the collision occurred right beside a licensed premises and also just around the corner there is Johnson’s nightclub.

“Pedestrians in that area may have been under the influence of alcohol which slows down their reactions and this aggravated the offence.”

Miller was fined £810 and banned from driving for 16 months.