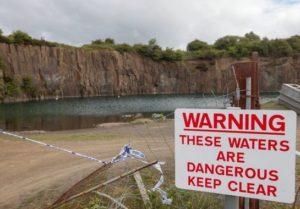 A Fife man bought a large quantity of alcohol for young girls and one became so drunk she went into a pool of water at a notorious quarry.

The girl was feeling suicidal and walked into the water at the Prestonhill Quarry at Inverkeithing, where other youngsters have died.

In the dock at Dunfermline Sheriff Court was William Cameron (44), of Fraser Avenue, Inverkeithing.

He previously admitted that on 6th July last year at Shad Super Store, Fraser Avenue, he bought alcohol for two girls then aged 15 and 16.

He also admitted that on 5th February 2015 at Fraser Avenue he wilfully neglected two children in a manner likely to cause them unnecessary suffering or injury to health and he kept them in a filthy condition and exposed them to insecure controlled drugs and insecure weapons.

Depute fiscal Claire Bremner previously told the court the girls had gone to the quarry and consumed the alcohol. Cameron had bought them a bottle of vodka, a quarter bottle of vodka and Mad Dog 20/20 after they gave him money.

“One of them became very drunk and began feeling suicidal. She walked into the water up to her neck.”

A friend managed to get her out the water and an ambulance took her to hospital.

Defence solicitor Chris Sneddon said of his client buying alcohol for the girls, “It was a particularly stupid offence.”

Sheriff Charles MacNair said that following the child neglect offence Cameron had been given the opportunity to be of good behaviour.

He added, “Having regard to your record it was placing a significant amount of trust in you for you to be of good behaviour. You weren’t and provided alcohol to two girls, one of whom became so drunk that she went into an extremely dangerous area of water.

Cameron had been given early release and was sent back to prison to serve the rest of that sentence as well as more jail time for his latest offences.