Little dog put down after being “launched” by kick 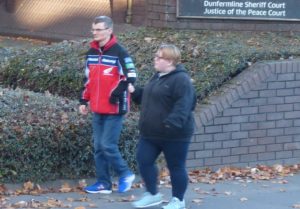 A tiny pet dog, kicked and launched into the air during a sickening attack, had to be put down.

The animal was neglected for months before the shocking incident, leading to a string of ailments.

The shih tzu – a toy dog breed ­– was dragged by sick owner Robert Goodwillie who then booted the animal resulting in her landing on the ground with her legs splayed.

Even before that, the pet had been caused unnecessary suffering by Goodwillie (29) and Levi Bissett (24), at their home in Broomhead Drive, Dunfermline, over a three-month period this year.

Goodwillie and Bissett (pictured above) had initially submitted guilty pleas by letter at Dunfermline Sheriff Court.

Both admitted that between 10th January and 10th April they caused an animal, a female shih tzu dog named Suki, unnecessary suffering.

Goodwillie also admitted that at his home on 10th April he caused the dog unnecessary suffering by dragging and kicking her, launching her in the air, resulting in her landing on the ground with her legs splayed.

A social work report had been called for and when the pair appeared in court for sentencing neither Goodwillie and Bissett were represented by a solicitor.

Asked by Sheriff Craig McSherry if they had anything to say about the offences, they both shook their heads.

Depute fiscal Alistair McDermid said, “The dog had to be put down because of the state it was in.”

However, there was no motion for a court order banning the pair from owning animals in future.

Sheriff McSherry imposed four-month restriction of liberty orders on the Goodwillie and Bissett.