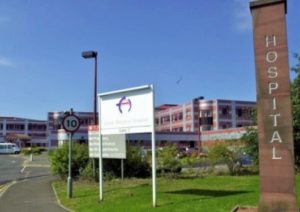 A hospital porter sustained burns when a drunken thug threw a hot drink into his face.

Lee Sutherland had earlier been shouting and swearing at members of the public and volunteers at a WRVS café at Queen Margaret Hospital in Dunfermline.

Sutherland (27), of Dunlin Avenue, Glenrothes, had been seen drinking Buckfast in the hospital.

After a trial at Dunfermline Sheriff Court, in which he represented himself, Sutherland was found guilty of two charges.

He also assaulted Anthony Boyle in the course of his employment by throwing hot liquid which struck him on the face to his injury.

Mr Boyle (58) told the court he had worked at the hospital for 27 years, the last two as a porter.

He was asked to go to WRVS café that day following reports of someone causing trouble there.

Mr Boyle said Sutherland was sitting on his own at a table in the café being abusive to people walking past.

“He was calling people paedophiles and f****** b******* as the went by. People were stopping and looking at him then just carried on their way,” said the witness.

Mr Boyle said he watched the situation with a colleague and then Sutherland accused them of stealing something out of his carrier bag.

“He was getting really aggressive. He stood up and was getting more verbal. He said he was going to punch us if we didn’t get out of his way.

“The lady in the café asked him if he would like a drink. She was trying to calm him down.”

However, Sutherland took the hot drink from her and threw it at Mr Boyle.

“It hit me on the face and chest. It was hot. I got hold of him and put him down. A member of the public helped hold him down until the police arrived.”

Mr Boyle received treatment for burns to his forehead and cheek before going home.

Head porter Gordon Small (58) told the court that he had been keeping an eye on Sutherland for several hours that day.

“I received a phone call from the reception desk saying there was someone in the café drinking Buckfast and creating a scene, using foul and abusive language.”

When Sutherland had gone out of the hospital, he was stopped from coming back in by Mr Small.

“He was abusive, calling me a ‘fat, paedophile b******’. I told him he wasn’t getting back in. Then a taxi pulled up and there was an altercation.”

The witness said Sutherland had kicked the taxi then ran away, chased by the driver.

Later, Sutherland had returned to hospital and had gone into the minor injuries unit demanding to be treated.

“He was taken into a cubicle but didn’t appear to have any injuries. He was verbally abusive to the nurse practitioner. He continued swearing and was told he wasn’t being treated.”

It was shortly after this that Sutherland went back to the café. “He was arguing with WRVS staff and customers. He was saying a computer cable had been taken out of his bag and was accusing the staff.

“Members of the public were asking him to calm down. He was telling them to f*** off.”

Sutherland repeatedly disrupted the proceedings by asking “Where’s the CCTV”.

When he went into the dock to give his version of events, he said, “I went to the hospital to pick up my diazepam. I was confronted by a mental patient in the toilets. He followed me and tried to assault me but he was holding a hot drink and scalded himself.”

Sheriff Charles MacNair found the charges proven but was unable to sentence Sutherland, who refused to confirm whether his schedule of previous convictions was accurate.

“I’m not listening to this, it’s absolutely ridiculous,” said Sutherland, who appeared from custody. Several times during the trial he ranted, “I’m getting the British Government involved in this. I’ve contacted Theresa May.”

The sheriff deferred sentence until 28th March when Sutherland will be brought back to court. “I’m not taking part in this shenanigans. I’m getting in touch with Theresa May,” he shouted as he was led away.

In 2017, Sutherland, then of Broomhead Drive, Dunfermline, was jailed for a year for repeatedly threatening to pour petrol over his mental health officer and set fire to her.

In January, he was jailed for contempt of court after shouting, swearing and spitting in the dock at Dunfermline Sheriff Court.