Photos of man sought over “despicable” robbery from Fife OAP 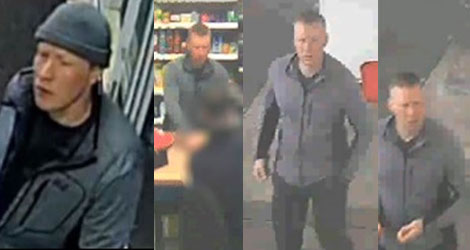 Police investigating a “despicable” knifepoint theft from a 76-year-old woman have released CCTV images of man they want to trace.

The incident happened in Lundin Road, Crossford, at around 11pm on Friday 4th May, when the woman was held in a house and a number of items were stolen from the property.

The pensioner was left “very shaken and distressed” by the robbery.

Officers believe the man in the images may have information that can help with the ongoing investigation.

The woman was approached by a man armed with a knife and forced back into her property where he stole a number of personal possessions, including jewellery and a number of cameras.

The man is described as being around 5ft 8ins tall, of medium build with short light hair. He spoke with a strong foreign accent, which could be Eastern European, and may drive a black coloured Vauxhall Mokka.

He is believed to have links to Greenock and the Clackmannanshire area.

Detective Inspector Kelly McEwan, from Dunfermline CID, said, “We have made significant progress in our investigation and are now issuing CCTV images of a man we would like to speak to in connection with the incident. Anyone who recognises him is urged to contact either police or Crimestoppers as soon as possible.”

She previously commented, “This is a despicable robbery of an elderly woman which left her very shaken and distressed.”