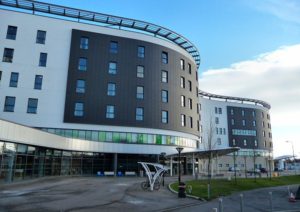 A 80-year-old woman, visiting her husband in hospital, had a terrifying experience when a drug addict jumped into her car and tried to steal from her.

The pensioner was driving out of the car park at the Victoria Hospital, Kirkcaldy, in broad daylight when she was confronted by a complete stranger out of his head on drugs.

John Watters, hallucinating after taking cocaine and Xanax, blocked her way then got into the car demanding that the frightened woman drive him home.

The incident was seen by the woman’s grand-daughter who was leaving her work at the hospital and followed the car.

The elderly victim fought back when lowlife Watters tried to steal her shopping bag and he ran off empty-handed when her grand-daughter caught up with them.

He admitted that on 23rd July at the Victoria Hospital, Hayfield Road and Dunnikier Way, Kirkcaldy, he obstructed the path of a car being driven by the 80-year-old woman entered the car without permission, refused to leave when asked to do so, demanded that she drive him to Leven and struggled with her.

He also admitted committing the offence when on bail.

Depute fiscal Sarah Lumsden said that the woman had gone to the hospital at 9am to visit her husband who was a patient there.

At around the same time Watters attended the hospital with a leg ulcer and appeared to be under the influence of drugs.

At 1pm the woman left the hospital along with her grand-daughter who works there and had just finished her shift.

The two of them walked to the car park area and got into their respective vehicles.

As the OAP was driving out of the car park, Watters suddenly jumped in front of her car.

He tried to get in the back of the vehicle then opened the front passenger door and got into the woman’s car.

She shouted at him telling him to get out. Watters said, “I just need to get up the road.” He then told her he wanted to be driven to Leven.

“She was frightened and decided to take him to a nearby bus stop where she would drop him off,” added the depute.

The grand-daughter then saw the woman driving out with a passenger and not heading in her normal direction. As a result of this she decided to follow her car.

The victim stopped the car in a lay-by near an Asda store and told Watters to get out.

He then tried to grab a shopping bag which the woman had in the car, claiming it was his.

The woman grabbed the bag to stop him stealing it and struggle then took place between them.

He then got out, looked in the back to see if there was anything else to take before going back to front and again pulling at the shopping bag.

However, by now the woman’s grand-daughter had arrived at the scene, got out of her car and shouted at Watters who then ran off.

When police arrived they found the victim to be in a “very distressed” state, said the depute.

Defence solicitor David McLaughlin said, “He’s someone who has struggled with drug addiction throughout his life.

“He had taken cocaine and also Xanax he tells me and can’t remember the incident. At noon he was said to be in hallucinatory state in the hospital.

“This was clearly a frightening experience for this woman and he accepts that.”