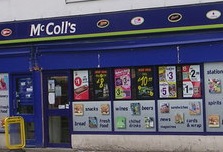 Two Fife brothers are behind bars after attempting to rob two newsagents at knife-point on the same night.

The masked would-be thieves ran from both shops empty-handed when terrified female staff refused to hand over cash as demanded.

Two branches of RS McColl in Glenrothes were targeted within half an hour. After the first raid ended in failure the pair, both from the town, tried again nearby but again it was a flop.

Fergus Muldoon (21) has been jailed for one of the hold-ups while his 19-year-old brother Alisdair has been given a lengthy sentence for the other.

He admitted that on 2nd January at RS McColl, Parbroath Road, whilst acting with another and with his face masked, he assaulted Lynn Burns in the course of her employment by presenting a knife at her, demanded money and attempted to rob her of a sum of money.

Depute fiscal Sarah Lumsden said the incident occurred at 8.20pm. Fergus Muldoon and another male, both with their faces masked, came into the shop.

Muldoon threw down a carrier bag and with a large knife in his hand said, “Give me the money.”

When the shop assistant told him she could not open the till, Muldoon said, “You better learn to.”

The other male stayed at the door and with no cash being handed over, the two of them ran from the shop.

Defence solicitor Iain McCafferty said, “It was just after Christmas and the New Year holidays.

“Alcohol was taken over a period of few days. Folly is the only explanation that can be put forward for the offence.

“In the cold light of day, he recognises there can be no excuse for this. In the past his decision-making has been clouded by alcohol and other judgement flaws.”

Last month, his 19-year-old brother Alisdair Muldoon was also given a custodial sentence for his actions that night.

He admitted that on 2nd January at RS McColl, North Street, whilst acting with another and with his face masked he assaulted Janice Tierney by presenting a knife at her, demanded money and cigarettes and attempted to rob her of money and cigarettes.

This incident took place at 8.45pm when he entered the shop, produced a knife and told the assistant “Put the f****** money in the bag.”

When the woman told him she could not give him money, Muldoon said, “Give me the fags then.”

The woman refused to do so and Muldoon put the knife down the front of his trousers and left with the other male.

Another brother Gregor Muldoon, who had dropped off the pair of them in his car and picked them up later, was shown CCTV images of the incidents by police.

He identified his brothers by the clothes they were wearing that night.

Alisdair Muldoon, who had been given early release from a previous sentence, was sent back to Polmont to serve the remaining 93 days and will then start a 40-month term for this latest offence.