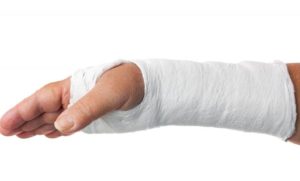 A delivery driver sustained a broken arm after being attacked by an irate resident whose driveway was blocked by the lorry.

The incident happened outside a shop in Cardenden when the lorry stopped local man Barry Hatton from leaving for work.

There was a physical altercation and Hatton “exploded” when his mobile phone was broken in the struggle.

The lorry driver was then knocked to the ground and then punched and kicked on the head and body, resulting in hospital treatment.

Hatton (36), of Balderran Drive, appeared in the dock at Dunfermline Sheriff Court.

He admitted that on 13th December at Craigside Road, Cardenden, he assaulted Barry Lee by struggling with him, whereby he fell to the ground and then punched and kicked him on the head and body, all to his severe injury.

Depute fiscal Alistair McDermid said the incident happened at around 7am when the delivery driver parked outside the comvenience store.

He replied that he would so but it would take another five minutes to complete the delivery.

“The accused did not react well to that and began to shout. He then lunged towards Mr Lee and tried to punch him. He missed but Mr Lee fell backwards,” added the depute.

“Both ended up in each other’s grasp and they fell to the floor. They got up but the accused then got Mr Lee back on the ground and began to punch and kick him on the head and body.

“The shop owners stepped in and the accused was ushered back towards his home to defuse the situation.

The driver later went to hospital where it was found he had a fracture to his forearm which was put in a cast.

Defence solicitor Peter Robertson said, “Mr Hatton describes himself as exploding when he discovered his mobile phone was broken.

“The lorry was preventing him from leaving for work and he had people to pick up.”

Sheriff Alison McKay said, “This is an appalling incident with no justification whatsoever as far as I can see.”

She imposed a community payback order with one year’s supervision and 180 hours of unpaid work. Hatton was also ordered to pay £800 compensation.