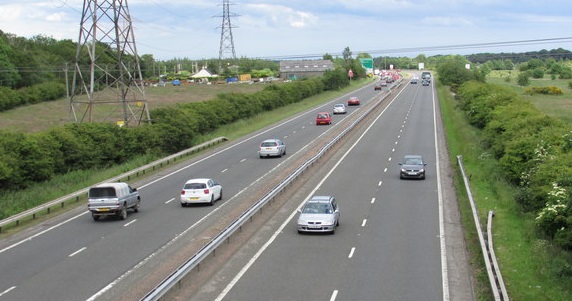 A motorist, who pulled out of a lay-by on the A92 in Fife without indicating and almost caused a major collision, has received a ban.

Paul Fullerton’s erratic driving continued as he moved along the dual carriageway at a crawl.

Fullerton (59), from Edinburgh, appeared in the dock at Dunfermline Sheriff Court.

He admitted that on 21st May on the A92 between Kirkcaldy and Lochgelly he drove a car dangerously by exiting a lay-by without signalling when it was unsafe to do so, causing other drivers to take evasive action and drove at speeds far below the 70mph limit.

Fullerton was seen driving a white Hyundai out of the lay-by without using his indicators.

“He entered into the traffic which was travelling at speeds of 70mph. Other drivers were not aware he was going to leave the lay-by when he pulled out,” added the depute.

“These drivers had to brake to avoid a collision. The accused then continued on his way driving at a speed considerably below the limit.

“He was unaware of the danger he had caused and it was only the actions of others that had prevented a collision.”

Fullerton was then stopped by police at the Crossgates slip road.

Fullerton, who was representing himself in court, was asked if he had anything to say about the incident. He replied, “No, it’s true. That’s what happened.”

Sheriff Craig McSherry banned Fullerton from driving for a year and until he passes the extended test. He was also fined £700.